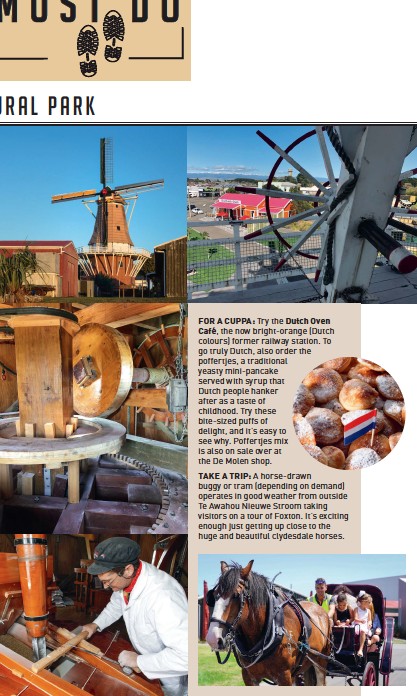 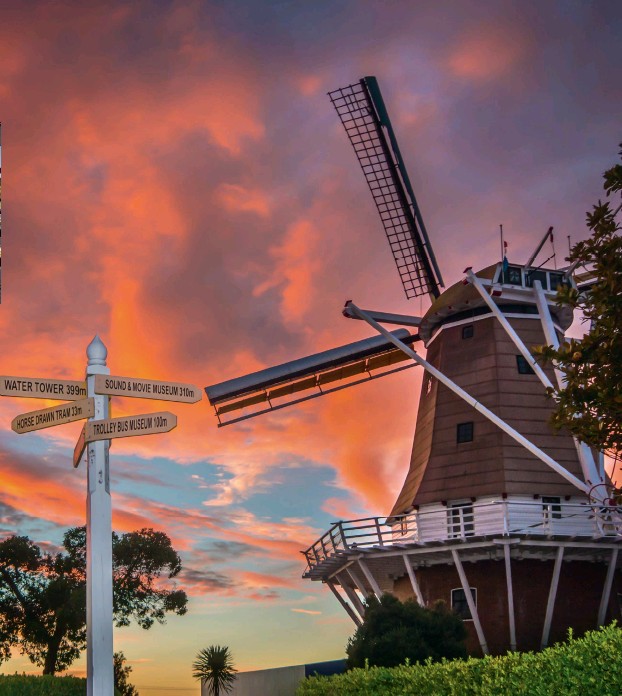 Foxton residents are proud of the Riverside Cultural Park, and rightly so. As the name suggests, here visitors learn about culture, including that of local Māori, as well as Dutch settlers, and what the Dutch have contributed to “Kiwi” culture. Visitors might, though, be confused by the “Riverside” part of the name as there's no river in evidence today. But, until the mid-1900s, Foxton had a deep-water river port that silted up after some ill-conceived flood preservation work. Yet, hang fire, because there's a river-rejuvenation plan to restore water to the town over the coming years. No need to travel to the Netherlands to climb a windmill and see 17th-century technology in action — just stop at Foxton. First proposed in 1990 by two local Dutchmen, but not completed until 2003, the windmill — “de molen” in Dutch — dominates the town. Built to a traditional design, with appropriate concessions to New Zealand's building code (allow time to watch the looped video about its conception and construction), the windmill is fully operational. Its millstones, powered by the turning sails, can mill up to 250kg of various flours a day, available for purchase in the store on the bottom floor. Many other Dutch treats are also on sale — try some salty dutch liquorice, syrupy stroopwafels, spiced almond speculaas, rich chocolate flakes, and various cheeses. Entry to the ground floor is free but do pay the gold coin fee to climb the three ladders to the top floor to see how the sails power the cogs, which rotate the millstones, which grind the grain, which bakes the bread. On the way, various Dutch-related curios are on show, including games for the kids, such as Connect Four (or Four in a Row in Dutch) and mini shuffleboard — both apparently originally Dutch games. Pop out on the second floor for the view of Foxton, across the estuary and down the beach. The ladders to the windmill's upper storeys are steep but navigable for most, young and old. Entry to upper storeys $2 unguided, $3 guided. 96A Main Street, Foxton. (06) 363 5601, foxtonwindmill.co.nz