THIS IS A LAND 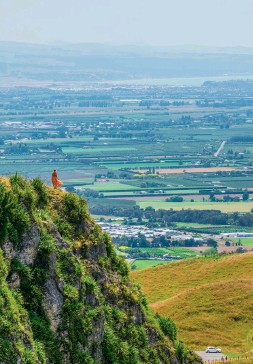 of layers. The horizontal lines of sedimentary limestone on the sheer cliffs of Cape Kidnappers and crinkly ridges of Te Mata inspire awe, pushed up from deep within the earth thousands of years ago by volcanic activity. On the surface, Hastings is New Zealand’s fruit bowl, known for its uniform rows of apple and peach trees on the flat-as-apancake Heretaunga plains. But the landscape is, in fact, anything but unvarying and nurtures world-class artisan producers, winemakers, artists and cultural leaders. Much of Hastings’ richness stems from its uniqueness. Rangitāne Māori and Ngāti Kahungunu feuded over lands rich in tuna (eels) and kai moana. Enter English businessman Thomas Tanner, who took a punt that draining the swamp in the Heretaunga plains would create excellent farmland. The land he and other Pākehā settlers seized illegally from Māori became New Zealand’s top fruit-growing areas. The founders of Hastings City were so committed to a grid street layout across the land scarred by a braided river system that they built the city centre on top of Makiriri Creek. The 1931 Hawke’s Bay earthquake destroyed most of Hastings CBD except for the Art Nouveau-style Opera House, which rolled on the river stones beneath as if on marbles. Chris Pask, the owner of an aerial topdressing business, risked becoming a laughing stock when, in 1981, he purchased a 40ha block of land in the Gimblett Gravels to grow grapes. The block’s stony, infertile soil, laden with unearthed rock from the Ngaruroro River, was used as a rubbish dump and gravel quarry. Now that soil, so poor in quality that real estate agents couldn’t give it away, is one of Aotearoa’s top wine-growing areas. The constant tug and pull of earth mother Papatuanuku and her son Rūaumoko, god of earthquakes and volcanoes, is often felt in Hastings as regular mini quakes. This shaky ground has created people who are good at keeping their balance and starting over. The Hastings CBD is undergoing a regeneration project and is being transformed by enthusiastic locals into a multicultural gourmet destination and artists’ haunt. Parts of the drained swamplands are being reverted to wetlands, and growers are adopting new sustainable farming techniques. The 18 pou in Civic Square and the resurgence of Hakikino Pā near Waimārama indicate the resilience of tangata whenua, rebuilding after crimes of colonization.