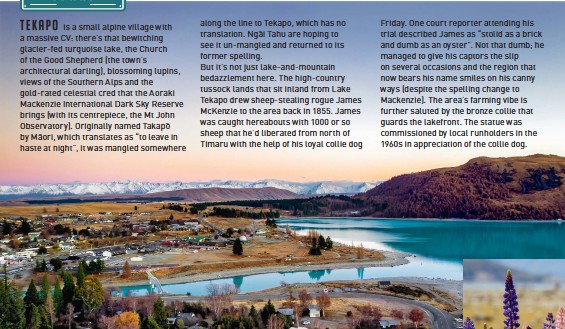 is a small alpine village with a massive CV: there's that bewitching glacier-fed turquoise lake, the Church of the Good Shepherd (the town's architectural darling), blossoming lupins, views of the Southern Alps and the gold-rated celestial cred that the Aoraki Mackenzie International Dark Sky Reserve brings (with its centrepiece, the Mt John Observatory). Originally named Takapō by Māori, which translates as “to leave in haste at night”, it was mangled somewhere along the line to Tekapo, which has no translation. Ngāi Tahu are hoping to see it un-mangled and returned to its former spelling. But it's not just lake-and-mountain bedazzlement here. The high-country tussock lands that sit inland from Lake Tekapo drew sheep-stealing rogue James McKenzie to the area back in 1855. James was caught hereabouts with 1000 or so sheep that he'd liberated from north of Timaru with the help of his loyal collie dog Friday. One court reporter attending his trial described James as “stolid as a brick and dumb as an oyster”. Not that dumb; he managed to give his captors the slip on several occasions and the region that now bears his name smiles on his canny ways (despite the spelling change to Mackenzie). The area's farming vibe is further saluted by the bronze collie that guards the lakefront. The statue was commissioned by local runholders in the 1960s in appreciation of the collie dog.