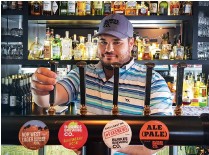 SOMETHING SPECIAL TO EAT

Great things happen in Twizel garages — that's where Burke's Brewing Co. was born. In 2010, Sebastian Burke started experimenting with homebrews in the evenings while running a helicopter-maintenance company. He produced his first retail batch in 2015 and was only aiming at 60 kegs a year to supply Mackenzie Country pubs; these days he does more than that in a summer month. It's the local community's fault. They were so supportive of Sebastian's early endeavours (providing him with chillers to store his beer and donating 6kg of rhubarb when they heard of his rhubarb wheat-beer plans) that he just had to grow. He still hatches new beer ideas in that Twizel garage, but demand is such that he brews commercial batches in a Christchurch facility. He's also opened an establishment in Tekapo — the Blue Lake Eatery & Bar. (See Somewhere Special to Eat, page 154.) The beer that flies out the door the fastest in summer is the crisp, tart and fruit-packed Raspberry Gose (a gold-medal winner at the 2018 Brewers Guild of New Zealand Beer Awards). The beer with the most intriguing name (and winner of the People's Choice award at the 2020 South Island Beer Festival) is the #Fakenews East Coast IPA. The beer that promises most to the exertionkeen visitor: Mountaineer's Breakfast Chocolate Oatmeal Milk Stout. But Sebastian's personal favourite? “Our Mackenzie Friday XPA. A simple, easy-drinking hoppy beer, great for any occasion.” Burke's Brewing Co. beer can be supped at the Blue Lake Eatery & Bar and found on tap throughout the Mackenzie Basin. On Facebook.