*From an article by Gerard Hutching, Shipwrecks — Graveyard Harbours in Te Ara in The Encyclopedia of New Zealand. 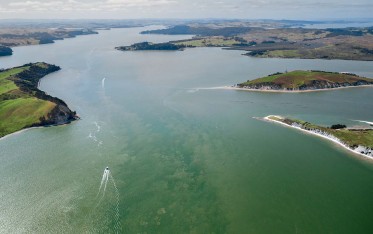 is massive. It's easily New Zealand's biggest and one of the largest in the world — with 947sq km of water at high tide and half of the seabed exposed as sandbanks and mudflats when the tide is out. That large volume of water, plus what drains from the catchment stretching east to the Brynderwyn Ranges, floods back and forth in a racing tide through an entrance only 6km across. It makes the harbour mouth hazardous. One sandbar is known as the Graveyard for the number of ships it has claimed. The total for wrecks at the Kaipara entrance officially stands at 43, but local lore claims a tally closer to 110. Samuel Polack, a trader of the 1830s standing at the harbour entrance, describes waves rising on sandbanks as far as three miles offshore. “The late westerly gale caused the fearful commotion of the rolling waves to bound on these sea sandspits, dashing the surf to an unusual height. No vessel, of any size or shape, could at this time have entered; instant shipwreck, into a thousand pieces, would have been the result.”* Experiences at the sandbar have not improved at all since Samuel's horrifying account. Māori history in the Kaipara begins with the arrival of the ancestral waka of Ngāti Whātua in the 1400s. Māhuhu-ki-te-Rangi was one of the original voyaging vessels. After some exploration of the upper half of the North Island, including voyages to east coast harbours, its seafarers settled on Tāporapora Island in the Kaipara Harbour. The area was abundant with seafood, including toheroa on Ripirō Beach (now more than elusive). The bar, though perilous, also deterred mass European arrivals for a time. Some 3000 settlers arrived in Auckland between 1862 and 1865 to establish Albertland as a nonconformist religious settlement at what is today Port Albert, 8km inland from Wellsford. Only several hundred made their way north to create a successful life on the 40-acre (about 16ha) lots assigned to each adult (plus 20 acres for each child). It wasn't easy to access the area. There was the poor inland route and that treacherous harbour entrance to navigate and — worse — the soil was generally infertile. But if religion didn't take root, chasing fortunes in kauri did. By 1890, 20,000 men were in Northland digging for gum in the thick peat swamps or milling the mighty trees for its straight, knot-free timber. Dargaville was a vital port for this trade. The oft-muddy waters of the tidal Northern Wairoa River were wide and deep enough for ships carrying kauri (timber and gum) out to sea and the world beyond. The only kauri leaving the region nowadays is in the suitcases of travelers. Carvers, jewelers, makers and artisans turn long-buried trunks of swamp kauri into anything from necklaces to a table for accommodating the biggest whānau.