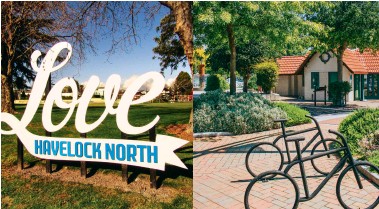 Although technically a suburb of Hastings, the settlement of Havelock North, tucked beneath Te Mata Peak, has its own history. It was a planned government settlement on land previously called Karanema's Reserve, purchased from Māori in 1858. Working-class Pākehā and farmers of small landholdings settled in the area, but large stations on the town's edges prevented growth. The first orchards appeared in the 1870s, but it was not until the 20th century that the region went gangbusters. Havelock North was planned to be the regional hub until the pathway of the Wellington-Napier railway line moved the city centre to Hastings City. Today, 13,000 people live in Havelock North, and its trendy fashion stores, art galleries and cafés give it a friendly village feeling.