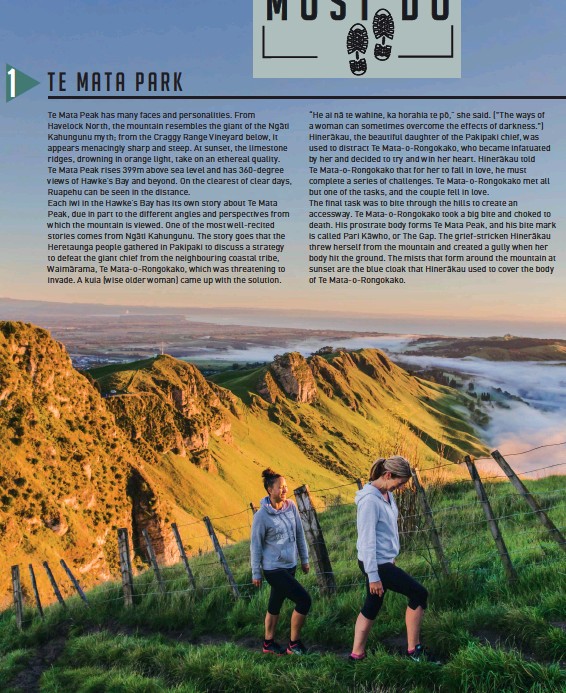 Te Mata Peak has many faces and personalities. From Havelock North, the mountain resembles the giant of the Ngāti Kahungunu myth; from the Craggy Range Vineyard below, it appears menacingly sharp and steep. At sunset, the limestone ridges, drowning in orange light, take on an ethereal quality. Te Mata Peak rises 399m above sea level and has 360-degree views of Hawke’s Bay and beyond. On the clearest of clear days, Ruapehu can be seen in the distance. Each iwi in the Hawke’s Bay has its own story about Te Mata Peak, due in part to the different angles and perspectives from which the mountain is viewed. One of the most well-recited stories comes from Ngāti Kahungunu. The story goes that the Heretaunga people gathered in Pakipaki to discuss a strategy to defeat the giant chief from the neighbouring coastal tribe, Waimārama, Te Mata-o-Rongokako, which was threatening to invade. A kuia (wise older woman) came up with the solution. “He ai nā te wahine, ka horahia te pō,” she said. ("The ways of a woman can sometimes overcome the effects of darkness.") Hinerākau, the beautiful daughter of the Pakipaki chief, was used to distract Te Mata-o-Rongokako, who became infatuated by her and decided to try and win her heart. Hinerākau told Te Mata-o-Rongokako that for her to fall in love, he must complete a series of challenges. Te Mata-o-Rongokako met all but one of the tasks, and the couple fell in love. The final task was to bite through the hills to create an accessway. Te Mata-o-Rongokako took a big bite and choked to death. His prostrate body forms Te Mata Peak, and his bite mark is called Pari Kāwho, or The Gap. The grief-stricken Hinerākau threw herself from the mountain and created a gully when her body hit the ground. The mists that form around the mountain at sunset are the blue cloak that Hinerākau used to cover the body of Te Mata-o-Rongokako.