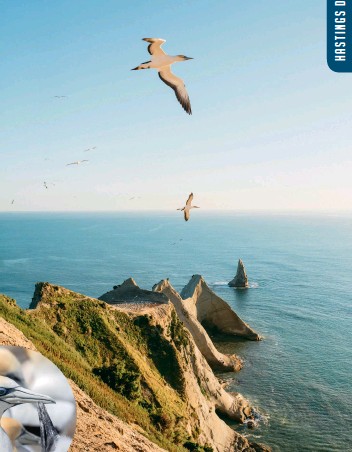 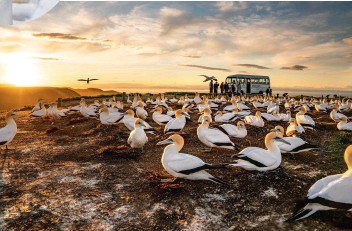 The most easterly part of Hawke's Bay is known to Māori as Te Kauwae-a-Māui/Cape Kidnappers (the jawbone of Māui). According to legend, Māui used a hook from the jawbone of his grandmother, Murirangawhenua, to fish up the North Island of Aotearoa (Te Ika-a-Māui). The region's English name has a less favourable narrative, deriving from an early conflict in 1769 between local iwi and Captain Cook and the crew of the HMS Endeavour. The incident occurred when several waka visited the ship off the Heretaunga Tamatea coast. Spotting Taiata, a Tahitian cabin boy, the warriors of the waka mistook him for a Māori captive. Cook's log says the warriors offered to trade fish before seizing Taiata and attempting to set him free. Cook, in turn, believed Māori were trying to kidnap Taiata and his crew fired on the waka. Taiata was unharmed and returned to the Endeavour, but several Māori died. GO GO GANNETS Watching the takapū/australasian gannets swoop across Te Kauwae-a-Māui /Cape Kidnappers and dive-bomb into the blue waters is more entertaining than any blockbuster movie. The majestic birds have a 2m wingspan and a polite way of communicating for traffic control — a “urrah” cry as they approach the nesting area for landing and “oo-ah” as they take off. But takapū have a rather tragic start to life. A chick's first flight off the sheer cliffs at Te Kauwae-a-Māui /Cape Kidnappers is a 2800km migration to Australia, and 70 to 80 per cent of birds die on route. However, those that return nest between August and April at one of the most spectacular spots in New Zealand. The colony of 20,000 gannets at Te Kauwae-a-Māui /Cape Kidnappers is the largest and most accessible in the world. There are four main nesting sites at the cape and a DOC-owned trail. Warning: trails have been closed several times in recent years due to dangerous landslides so check before visiting. doc.govt.nz/hawkes-bay GANNET SAFARIS OVERLAND With its white limestone cliffs, sapphire blue sea, deep green native bush and lime green golf course, the cape has such distractingly beautiful scenery, visitors don't realize they are holding their breath. Bus drivers for Gannet Safaris Overland have nerves of steel, steering their 4WD buses down skinny farm roads, with steep drops to distract them and no end of hairpin corners. Gannet Safaris drives across privately owned land, part of the historical Clifton Station and only accessible via a safari or to those playing a round at the Cape Kidnappers Golf Course. Tours end up at the upper plateau overlooking Shark Tooth Island, which is the largest nesting site for gannets in the area. 396 Clifton Road, Te Awanga. (06) 875 0888, gannetsafaris.co.nz GANNET BEACH ADVENTURES A 1949 Minneapolis-Moline tractor drags trailer-loads of visitors along Clifton Beach. This operation closed during the landslide in 2019 but is open again to the public, safety permitting. 475 Clifton Road, Te Awanga. (06) 875 0898, gannets.com