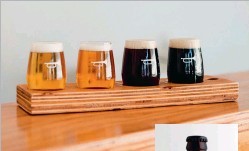 SOMETHING SPECIAL TO DRINK

Tigermilk might sound like something accidentally consumed by an unaware tourist on an overseas holiday. In fact, it’s the name of an IPA with a cult following described by its makers as “bold, but affectionate”. Brave Brewing Co has put the Hawke’s Bay’s burgeoning craft-beer scene on the map, winning a slew of awards including — most recently — a top 30 placing in the New World Beer & Cider Awards for its German-style Pilsner, The People’s Pils. The company is run by husband and wife Matt and Gemma Smith. They launched their beer business from their garage in 2014 after Matt won the Champion Home Brewer Award in the New Zealand Homebrew Championship. In November 2020, their brewery and taproom shifted into new premises in the former Herald-Tribune Building in the Hastings CBD. Watching self-declared beer-haters succumb to the charms of his craft beer is one of the things that gets Matt out of bed in the morning. “It’s satisfying to hear how your product has challenged someone’s perception of what beer can be, or to witness people sitting in your taproom, joyfully enjoying a beer and connecting with others.” 205 Queen Street East, Hastings. 027 460 8414, bravebrewing.co.nz