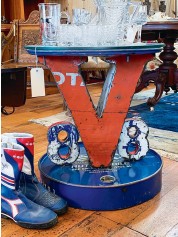 The objects on sale at Goldie's Junk 'n Disorderly range from the most curious of finds to high-end antiques, but Simon and Carla Hill-Hayr ultimately trade in social history. “People come in here and get what I call ‘memory grenades'. It's amazing to see all the memories flood in when people — especially older people — see something they had as a child,” says Simon. After 11 years trading in Foxton, Goldie's — and its hundreds of thousands of objects, including a vast collection of rare New Zealand first-pressing records (45s, 33s and 78s) and thousands of New Zealand books — has moved to Hunterville. It now spans four shopfronts on Bruce Street, as well as the Masonic Lodge up the road. Simon and Carla already lived in Hunterville and had their shop, World's End, there, so it made sense to consolidate their treasures in one town. While Goldie's certainly has heaps, Simon says he prefers to say it's all “junk' n' disorderly” so people don't expect him to dust. Maybe it's about just managing expectations, but there's plenty of treasure to be discovered. 9 Bruce Street, Hunterville. (06) 927 0024, on Facebook. For even more quirk, head next door to Hoote Couture of Steampunk, which is known within interested circles as one of the country's best steampunk stores. Open Wednesday to Saturday. 7 Bruce Street. 027 305 8437.