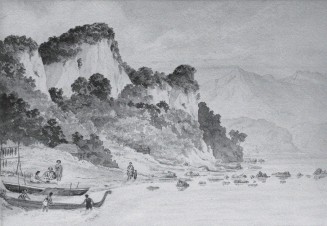 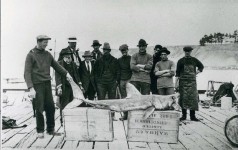 Take a gulp of pristine coastal air and discover the sheltered outcrops that are prominent around the Kaikōura Peninsula. It's easy to imagine what drew early settlers to this rugged coastal land HISTORY It's not surprising that the resources and sheltered bays that define Kaikōura are where this story begins. The region's earliest settlers, the Waitaha, were drawn to the rugged coastline by the abundance of moa and native birds. They were joined by Ngāti Māmoe in the 16th century and, through warfare and intermarriage, eventually laid claim to the land. Peace didn't last long. In the 17th century, waves of Ngāi Tahu migrated south from the east coast of the North Island. At first, the two tribes were peaceful and even formed an alliance through shared rivalries and marriage. But after a falling out, Ngāi Tahu took over the land. In 1770, they sat in canoes watching Captain James Cook's HMS Endeavour tack around the Kaikōura Peninsula. Cook believed it was an island and Ngāi Tahu were left for another 70 years before the next Pākehā arrivals. Kaikōura's unusually deep waters attracted its first European settlers. In 1852, Scotsman Robert Fyfe established the first shore-whaling station at Waiopuka, a sheltered bay on the peninsula. It would become the largest whaling station along the coast and, drawing on local Māori and foreigners for its whaling crew, created an influx of cash and new arrivals. But just as the moa suffered from exploitation, so too did the southern right whale. Within a few decades, whaling could no longer sustain the local economy. Farming became the mainstay for more than a century until, quite poetically, whales again returned to the spotlight. According to the famous legend, the ancient Māori ancestor Paikea rode on the back of a tohorā from the Pacific Islands to Aotearoa, and settled just north of Gisborne. It was one of Paikea's sons, along with the first wave of Ngāi Tahu in the South Island, who would lay claim to Kaikōura. Leaders of Ngāti Kuri, the local hapū of Ngāi Tahu, believed their prosperity could again ride on the tohorā. In 1987, Whale Watch was born. It heralded a new era for the land of moana (sea), for Kaikōura residents and marine life, using natural resources to once again develop the local economy.