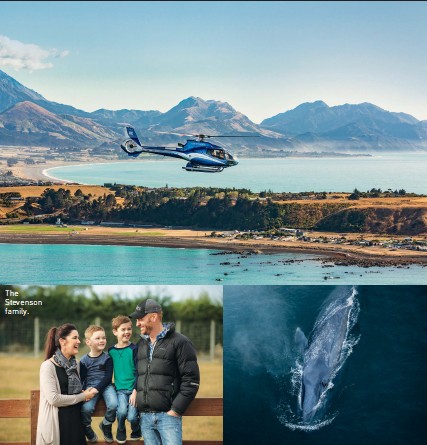 Daniel Stevenson had his sights set high when he sold his Blenheim home and bought a whale-watching permit in Kaikōura. Between the snow-capped mountains and the nearby marine wonderland, what could go wrong? His family-run helicopter tour company was running smoothly until, six months in, the earthquake ripped the land and economy apart. Daniel and his team of pilots were among the first to survey the road damage and stayed busy airlifting supplies in and out of the isolated town. But South Pacific Helicopters saw potential within the rugged and largely inaccessible Seaward Kaikōura Ranges; and alpine landings are now included in many of its whale-watching tours, providing a rare opportunity to step from the helicopter for a true mountains-to-sea spectacle. “Where else can you see a whale one minute and then step into the snow just 10 minutes later?” From above water, passengers can witness the whale's immense form as it bobs on the surface and then descends, its underwater shadow visible from the aircraft. Scenic flights are available year-round (weatherpermitting) and range in duration depending on the activity. Extending from the sea to the summit of Mount Fyffe, passengers too can set their sights high. In Daniel's opinion — the higher, the better. 58 West End, Kaikōura. 0800 360 886, southpacifichelicopters.co.nz