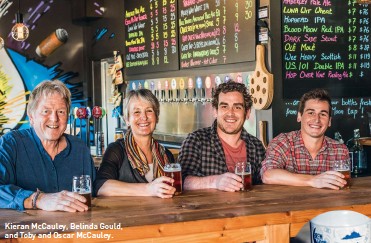 Belinda Gould was quick to learn that making beer is not akin to making wine. “There are enough similarities to fool you,” she says. The former winemaker lived in northern California in the 1990s, where she and husband Kieran McCauley got a taste for the craft-brew scene. In 2002, they returned to New Zealand to start a tiny brewery just south of Amberley, though Belinda continued working in the wine industry for another decade. “It's more fun making beer because you get the results faster and can play around. With wine you're waiting for a year for the result,” she says. Five years ago the family-owned brewery relocated to a larger site in Amberley, which residents embraced with enthusiasm. “We know our customers. It's the kind of place where you'll always see someone you know,” she says. Sixteen taps in the taproom all serve Brew Moon brews, including one apple cider thrown in the mix for non-beer-drinking patrons. Most of the beers change with the seasons; the Waipara series of hazy IPAs even changes with every brew. “We use different hops every time. Waipara means dirty water which is pretty much what a hazy looks like,” says Belinda. There's a charm to this, which Belinda attributes to both the beer — and the pizzas. A food truck, parked in the garden courtyard, delivers woodfired pizzas to diners. “And then there are the chocolate chip cookies,” Belinda says. “They've become the standard fare.” 12 Markham Street, Amberley. (03) 314 8036, brewmoon.co.nz