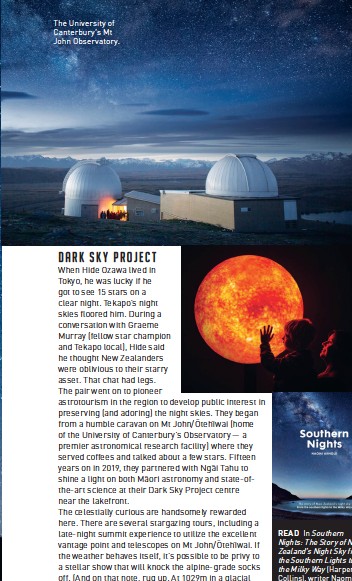 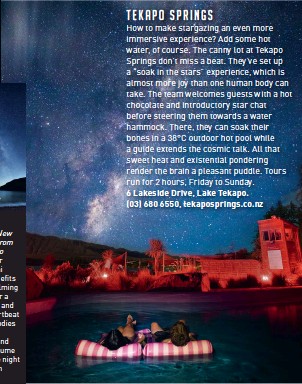 There’s a raucous light party going on in the Mackenzie skies — a celestial cacophony that receives regular fond looks from the humans below. This most extraordinary canopy of shine gained a suitably lofty title in 2012: Aoraki Mackenzie International Dark Sky Reserve. At 4300km², it’s the largest reserve of its kind in the world and umbrellas Tekapo, Twizel and Aoraki/Mt Cook National Park. It was awarded a coveted gold-tier status by the International Dark-Sky Association (IDA). Bob Parks, IDA’s executive director, doesn’t mince his words: “This means the skies are almost totally free from light pollution. To put it simply, it is one of the best stargazing sites on Earth." Thanks to glowing cities, half of the world’s population is unable to see stars. But Tekapo showed great foresight in the 1980s and instituted controls on outdoor lighting to contain light spillage and protect the research of the University of Canterbury’s Mt John Observatory. This makes it the perfect place to tilt heads starwards. Or as Stephen Hawking put it: “Look up at the stars and not down at your feet. Try to make sense of what you see and wonder about what makes the universe exist. Be curious.” Dark Sky Project When Hide Ozawa lived in Tokyo, he was lucky if he got to see 15 stars on a clear night. Tekapo's night skies floored him. During a conversation with Graeme Murray (fellow star champion and Tekapo local), Hide said he thought New Zealanders were oblivious to their starry asset. That chat had legs. The pair went on to pioneer astrotourism in the region to develop public interest in preserving (and adoring) the night skies. They began from a humble caravan on Mt John/Ōtehīwai (home of the University of Canterbury's Observatory — a premier astronomical research facility) where they served coffees and talked about a few stars. Fifteen years on in 2019, they partnered with Ngāi Tahu to shine a light on both Māori astronomy and state-ofthe-art science at their Dark Sky Project centre near the lakefront. The celestially curious are handsomely rewarded here. There are several stargazing tours, including a late-night summit experience to utilize the excellent vantage point and telescopes on Mt John/Ōtehīwai. If the weather behaves itself, it's possible to be privy to a stellar show that will knock the alpine-grade socks off. (And on that note, rug up. At 1029m in a glacial region, it can be rather fresh. The guides kit out customers with warm jackets and hot chocolates, but sartorial good sense is a must.) The Dark Sky Project also runs an indoor multimedia tour where Māori mythology meets modern science (perfect for grotty-weather days). This is where staff get to show off their shiniest toy: the mighty Brashear Telescope (a marvel of Victorian engineering created in 1894). 1 Motuariki Lane, Lake Tekapo, (03) 680 6960, darkskyproject.co.nz Billy the Bard For a more informal and quirk-rich tour, Billy the Bard is the man. On many a beautiful evening, he can be found on the Tekapo waterfront delivering his spangled stories in a show titled, Calling out the Stars. Tekapo resident William Beauchamp developed this busking show to inject a bit of local character and lore into the stargazing experience. He calls it “starry-telling”. The price of his tours is a mark of his genuine hospitality: “Performances freely given. Donations of worth gratefully accepted.” Call/text William to check on his bard-ing: 021 360 006. Meeting place: the Tekapo Solar Challenge Circle on the lakefront. Time: listen for the drums. Tekapo Springs How to make stargazing an even more immersive experience? Add some hot water, of course. The canny lot at Tekapo Springs don't miss a beat. They've set up a “soak in the stars” experience, which is almost more joy than one human body can take. The team welcomes guests with a hot chocolate and introductory star chat before steering them towards a water hammock. There, they can soak their bones in a 38°C outdoor hot pool while a guide extends the cosmic talk. All that sweet heat and existential pondering render the brain a pleasant puddle. Tours run for 2 hours, Friday to Sunday. 6 Lakeside Drive, Lake Tekapo. (03) 680 6550, tekaposprings.co.nz